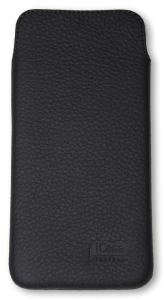 Last week I ordered an iCase Leather Thin Series for iPhone 5 case from iCase Leather in Hungary. According to their site the case is made with “genuine leather”. I had heard about the case in a thread on MacRumours. User esfrost wrote about it and posted a couple of photos, which in my opinion looked great. It seemed promising and I hoped it could compete with the Sena Ultraslim Classic.

I have been using two Sena Ultraslim cases the past five years. The first was for an iPhone 3G and the second was bought in 2010 for an iPhone 4. I have been very happy with them. The leather quality is great, the fit is perfect, but the suede like material on the inside wears out eventually. The iCase Leather has a different material on the inside, Alcantara, and I hoped it would prove more durable.

I was a little hesitant ordering from iCase Leather. The site is mainly in Hungarian but it has a language selector where English is an option. It is far from complete though, with some texts totally missing, and some not translated at all. 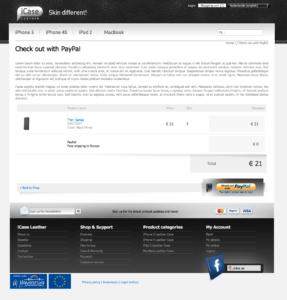 In places there are even Lorem Ipsum placeholder texts! The comment/review sections for each the products are filled with over 3,000 entries of spam. The English Customer Service page is blank. And so on…

Despite these shortcomings of the site I decided to go ahead and place an order, since it wasn’t too much money on stake. And shipping was free within Europe. I checked out and paid with PayPal, guessing along the way what the Hungarian and Lorem Ipsum texts meant. I got the usual confirmation emails. A week later the package arrived as a registered letter. The box it came in was reasonably well produced and it looked promising.

My initial impressions however when holding the iCase Leather in my hands weren’t the best. While the shape and fit are excellent, the material is strange. My first thought was that it was not real leather.

Compared to the Sena cases, which have a shiny, organic, flexible feel, as you would expect leather to be, the iCase Leather is dull, dry, stiff and feels like some kind of foam plastic. The leather smell seems to be there though.

This leads me to think that the material used in the iCase might be bicast leather, a thin leather base covered with polyurethane. Another common name for this is PU leather. It is often used in car seats, furniture and is very easy to clean and maintain. In fact, the material used in the iCase Leather looks and feels very similar to the easy-to-clean head rests on the commuter rail. 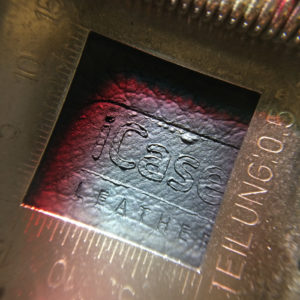 The iCase Leather logo seems melted into the material. Photo taken through a loupe. The red color is due to funky lighting at the time.

What also caught my eyes was the iCase Leather logo in the bottom right of the case. It looks as though it has been melted into the top coating of the material, something that I’m fairly certain wouldn’t be possible if it was genuine leather.

Anyway, I thought I should at least give it a chance. So I had my iPhone 5S in the case for about eight hours. During this time I estimate I removed the phone from the case 10-15 times. To my dismay, by the end of those eight hours I noticed how the case had left slight marks on the anodized aluminum sides of the device.

Users of the Sena Ultraslim cases will recognize the polishing caused by the stitching on the inside, but it only appears after weeks, or perhaps even months, of use.

I was worried that this was what had happened, only so much sooner! But fortunately the dark streaks on the phone could be rubbed off. My concerns though are that if the iCase Leather leaves some kind of residue each time I insert or remove the phone from the case it will probably accelerate the polishing effect.

So, I decided to not continue using the iCase Leather.

If I am to use a case that can cause wear on the finish of my iPhone, it better be a case that I otherwise love for its quality and material. And I don’t love the material in the iCase Leather.

Now I have ordered a new leather case, this time from Atelier Pall, which has gotten good reviews. I look forward to receiving and reviewing it soon.

Note: I have emailed iCase Leather for a comment, but haven’t gotten a reply.